🤭What did they just say? Brand suitability is nuanced & brand-specific, especially in podcast where you can’t be sure what a host will say. Or can you? Barometer can.

Acast up, Audacy down

School of Podcasting — The top website to learn how to podcast just added unlimited one-on-one consulting. Use the coupon PODNEWS to save 20% and have a podcast consultant in your pocket

CBC is a global leader in high quality audio storytelling. This month in Podnews, we’re proudly sharing our top 20 most downloaded podcasts of the year. Thanks for listening - check out @cbcpodcasts for more!
From CBC Podcasts #14 is: Pressure Cooker “You’ll be a fly on the wall listening to unbelievable conversations between two dimwits trying to carry out their deadly plan, and the police who seem to be coercing them into doing it.” - Lauren Passell, Lifehacker
…These Are Their Stories: The Law & Order Podcast gets a write-up from The Concord Monitor. They will be doing a live show on stage this Friday, at the Bank of NH Stage in Concord.
Wondering what your new business owners are going to do with your company? Twitter employees were told to listen to All-In with Chamath, Jason, Sacks & Friedberg, according to reports: a ninety-minute show with “six interesting quotes”, according to Business Insider. Both Jason (Calcanis) and (David) Sacks are working at Twitter now.
Junkyard Mayhem with Squirmy & Grubs is new today from YEA Networks from popular YouTubers Hannah and Shane Burcaw. The married couple share a raw and unfiltered look into their interabled love life—Shane is disabled and uses a wheelchair; Hannah is non-disabled and performs all of Shane’s daily care.
Legendary with Kevin Jonas Sr is new from Storic Media. If you think Kevin Jonas Sr has something to do with The Jonas Brothers, you’d be right: he’s the patriarch of the family, and has been in entertainment for decades. In the new show he talks with entertainment icons about legendary moments and the stories behind them.
It’s Not Only Football: Friday Night Lights and Beyond is new from Podcast One, with original “Friday Night Lights” cast members Zach Gilford, Scott Porter and self-proclaimed “Friday Night Lights” superfan Mae Whitman. It will debut tomorrow.
A new season of Crooked City: The Emerald Triangle launched this week. follows journalist Sam Anderson’s quest to uncover the truth when he learns that one of his former schoolmates has been accused of murder. Sam travels to an area of northern California known as the Emerald Triangle – where most of the USA’s homegrown marijuana comes from – and soon learns that its promises of freedom, money and an alternative way of living aren’t as idyllic as they seem. It’s from Novel, truth.media and Sony Music Entertainment. 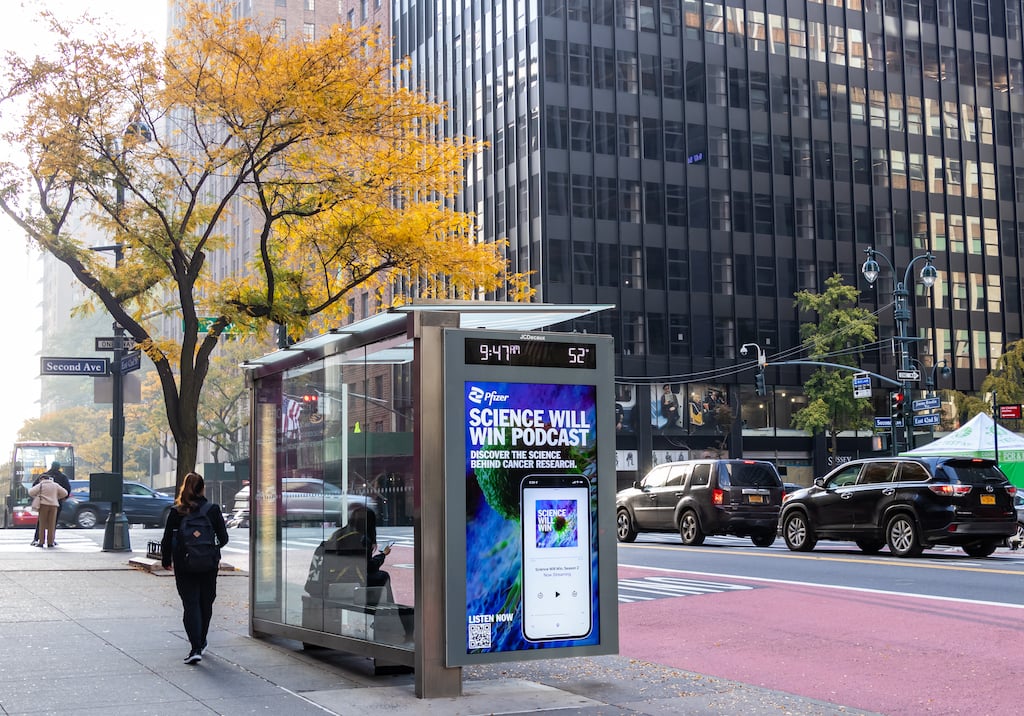 Michele sends us this fancy shot of Pfizer’s Science Will Win being advertised on a New York City bus shelter (this one right outside Pfizer’s World Headquarters). The ad contains a Chartable smart-link QR code - try giving it a go.