❤️ Every episode of a podcast is a little different (the problem? sometimes TOO different). Preview brand suitability across recent top content with the Barometer Podcast Suitability Spotlight

2:58
LISTEN · November 23, 2022 · Updated Jan 9, 2023 · 2.8 minutes to readAlso listen on a smart speaker, or in a podcast app
In Sounds Profitable with RedCircle this week, Bryan Barletta looks at the state of subscription podcasting. Podcast subscriptions are just moments away from being a normal part of our ecosystem. What’s holding that future back today? Plus, he’s joined by SoundStack CEO Jon Stephenson for a deep dive of the company’s hosting and monetisation tool.
Classifieds - your job or ad here

A Newsletter About a Single Minute of Audio — Every Sunday, The Big Minute recommends 60 seconds from a recent podcast episode, and dives deep into why you'll love it. The next issue goes behind bars with a chilling true story.

CBC is a global leader in high quality audio storytelling. This month in Podnews, we’re proudly sharing our top 20 most downloaded podcasts of the year. Thanks for listening - check out @cbcpodcasts for more!
From CBC Podcasts #5 is: Sickboy Laughter is the best medicine, right? Join co-hosts Jeremie, Brian and Taylor for illuminating, insightful and hilarious conversations about what it’s like to be sick with the people who experience it firsthand.
In this week’s New Media Show, Todd Cochrane calls on advertisers to “grow some”, and rails against companies offering services like “ad safety” and brand suitability. Gratifyingly, both Todd and Rob quote Podnews’s current title sponsor, Barometer, as a company offering this service. Advertising in Podnews works!
UNBOXED is the first original podcast from UK production company Listen, in partnership with Jordan Schwarzenberger, co-founder of Arcade Media and manager of The Sidemen, one of the biggest creator collectives on the globe. The first two episodes drop today. 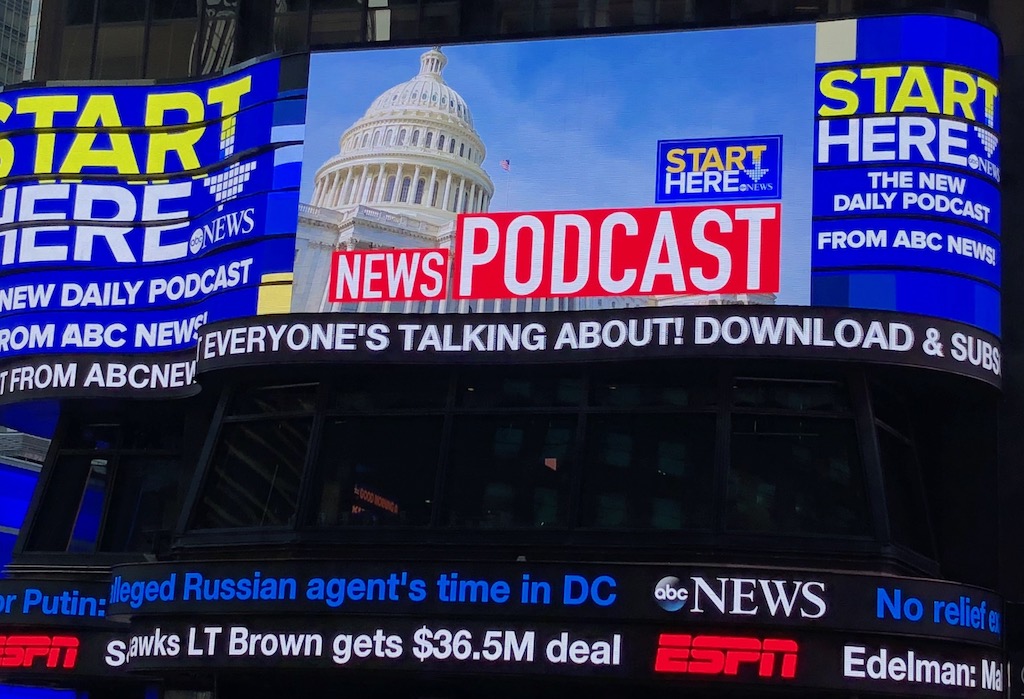 One from the archives: from March 2018, this was the launch of Start Here from ABC News, as shown on the “ABC SuperSign” in Times Square, New York NY, USA. Unlike some of the billboards we’ve shown recently, you’d be left in no doubt that this was a podcast. The ABC SuperSign is 3,865 square feet in size, which is 342 m2, half the size of a World Cup soccer pitch, or, and we know this will help, 0.000016 times as big as Belgium.