25,000 podcasters choose Podpage for their website because it's the simplest way to build a worry-free, beautiful home page for your show. Use code PODNEWS22 for $10 of credit for any plan.

Submit Your Podcast for a Chance to be Featured — Submit your Podcast to Find That Pod – A Newsletter featuring 6 podcasts sent with thousands of readers every week. Submit and Subscribe Now!

Thank you to Angie Griffith for your kind personal support of Podnews via Patreon. We’re grateful for your support of our independent journalism. You, too, can be like Angie.

Founded in 2019 by Jessica Cordova Kramer and Stephanie Wittels Wachs, Lemonada is an award-winning, independent, audio-first podcast network, with a mission to make life suck less.
From Lemonada Media: On Funny Cuz It’s True Elyse Myers interviews well-known individuals about their most awkward moments. Relentlessly unfiltered and relatable, we’ll laugh at and learn from the moments that keep us up at night.
Best Friend Energy is new from Sony Music Entertainment, The Home Edit, and Hello Sunshine. It’s a weekly show, hosted by Clea Shearer and Joanna Teplin, The Home Edit co-founders and the New York Times bestselling authors.
Within Men In Blazers and Pod Save The World you’ll find World Corrupt, a new show focusing on the FIFA World Cup in Qatar, which it says is ethically fraught, morally bankrupt and already soaked in blood and oil. It launched earlier this week.
Running Smoke launches today. It’s described as a white-knuckle true story about fast cars, organized crime, and a NASCAR driver changing the future of Native rights. It’s hosted by journalist Rajiv Golla and it’s a co-production of Dan Patrick Productions and Campside Media.
In the Tribeca Audio Premieres podcast feed today, a new audio-drama podcast makes its debut. Lake Song, an epic audio-drama series set in the distant future of Make-Believe Association’s home city, Chicago, looks at the city in 2098, when the Republic of Chicago has what the world needs: fresh water. Expect sci-fi and music, politics and poetry.
Look Again: Mental Illness Re-Examined is, say the producers, “for anyone whose life has been touched by mental illness. In other words, it’s for everyone”. By the British Columbia Schizophrenia Society, the show returns for season three today, and sets out to illuminate and help build compassion and better understanding for individuals and families affected by severe and persistent mental illnesses like schizophrenia. 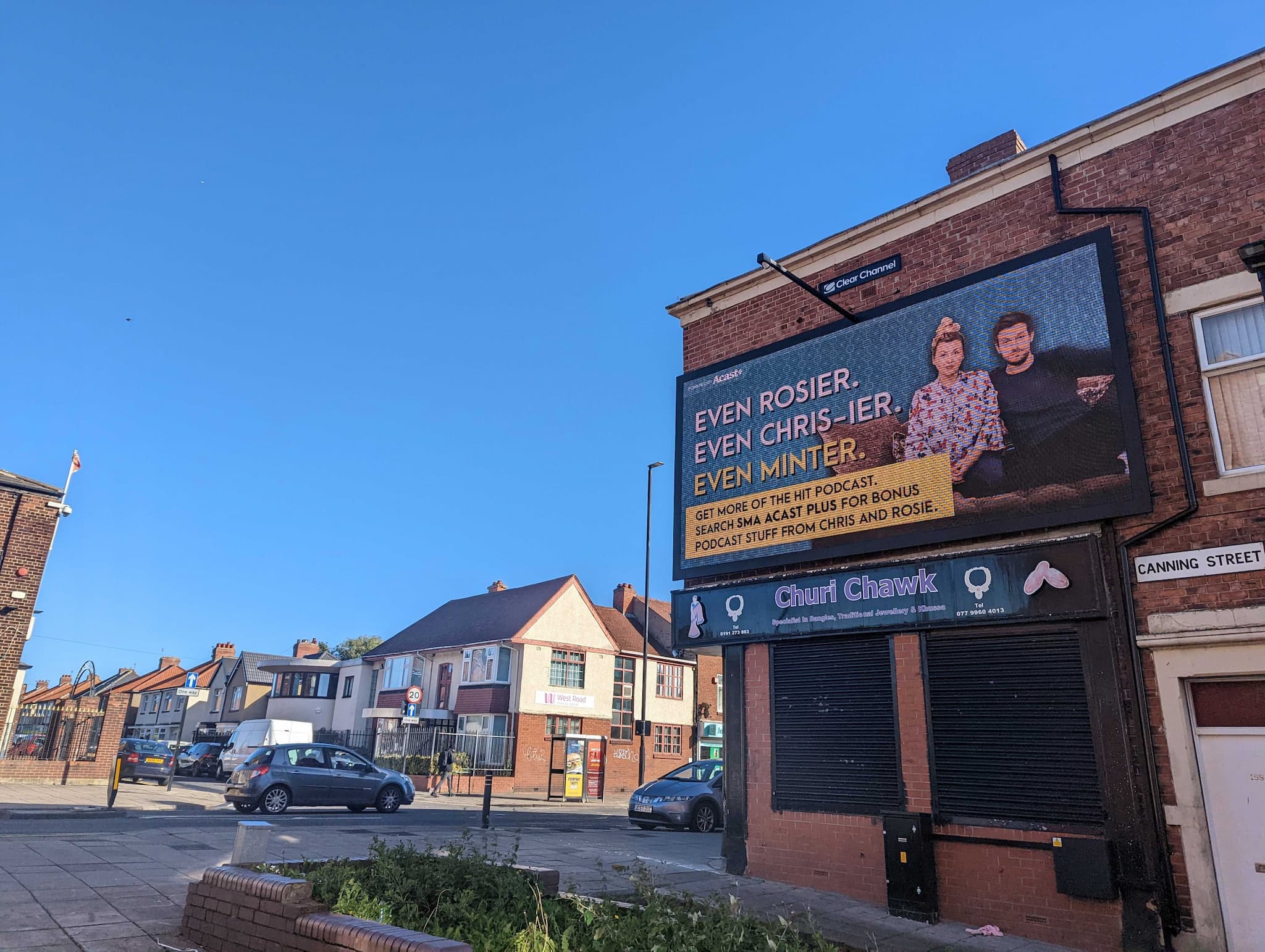 In their home town of Newcastle, England - Sh**ged Married Annoyed's Acast+ premium membership gets a highlighted billboard on the A186 in Benwell Grove.

Number one for podcasts - Oct 12