Is it a lemon? Apple's botched podcasts rollout

A bug at launch, which pulled shows out of the public API for a time, was quickly fixed. But, a month on, Apple Podcasts is still plagued with bugs and inconsistencies, according to feedback sent to Podnews.

We heard from a number of publishers, some large companies with many hundreds of shows, some smaller podcasters with one or two.

“My login to Podcast Connect was broken for several days. Then it was OK. And now it’s broken again, telling me “We’re setting up your account”. Apple support tells me it’s fixed. It clearly isn’t. … Hours of being unable to access Podcast Connect; totally unable to login.”

Many users are told their account is being “set up”, and that they should come back later. Others have issues with linking their Apple ID to their Podcasts Connect account.

We also experienced a delay, then we had access for a week or so, and then it mysteriously switched back to “setting up your account” for a while.

Speaking to some publishers, the problem appears to be exacerbated by the AppleID and the Apple Podcasts Connect support teams being separate, and having no way of working together to fix a user’s issue. Publishers are being told by Apple Podcasts to talk to the AppleID team. 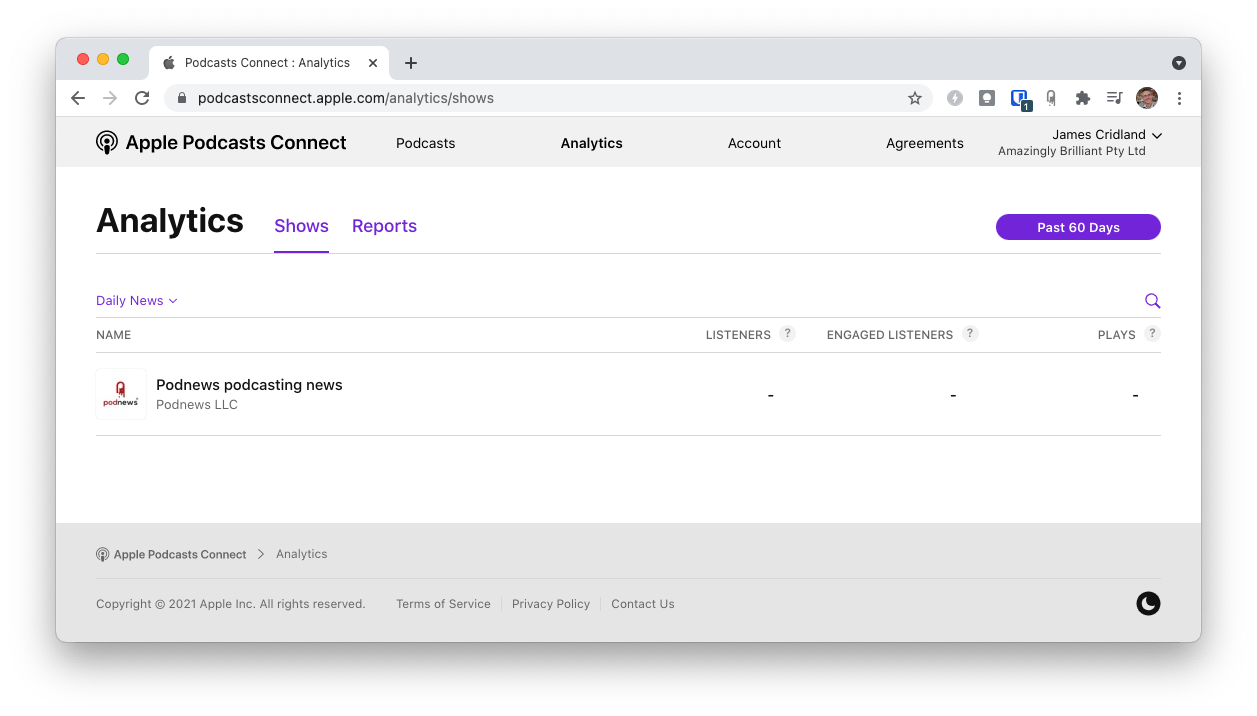 We agree: we, too, have no analytics for any of the shows in our account. “Not enough data”, we’re told.

Being fair, Apple Podcasts stats are not comprehensive (Apple’s only 40% of the market), and only measure a sample of your audience; but the loss of analytics gives a feeling of lack of confidence in the entire platform.

“New episodes (in the last week) have taken hours to appear, sometimes more than six, sometimes two.” … “We have a three podcasts that have not been updated on Apple Podcasts since April 23. I have been told there’s nothing else we as a company can do.” … “Episodes routinely get delayed from 5 to 25 hours. I publish daily, so that’s a real issue. I run a daily news podcast and have now had to pretty much give up on Apple as a provider. Sometimes they appear a day later, sometimes 3 hours, who knows. Utterly ridiculous.” … “Apple Podcasts is still a disaster. The new episodes I produce across multiple podcasts are still taking up to 24 hours to appear in the Apple Podcasts app. This is true with podcasts hosted on Anchor as well as Podbean.”

The new Apple Podcasts appears to use Apple’s own crawler for everything, according to our research: a different behaviour than previously.

For May 26, it visited Podnews’s RSS feed 140 times (every ten minutes); but this does not appear to be happening for everyone. There again, not everyone has 19,000 daily subscribers to their newsletter for podcasters.

“Our feed isn’t updating in a timely way: a huge problem for a daily podcast like ours, not only for the audience but also from a revenue point of view.”

We’re seeing this feedback relatively often: it’s not just a pain for audiences, it has serious impact for revenues. Advertisers who have paid to be in a specific episode at a particular time aren’t getting what they’ve paid for. Publishers are powerless to fix the issue.

Artwork, whether on a show or episode level, can be important - one publisher telling us that a client’s old logo is still appearing, another that their artwork contains a host who they’ve since fired.

Switching artwork while keeping it heavily cached can be hard to achieve: so hard, I spent some time working out the best way to do it for this website. However, it’s important to get artwork, the most visible visual manifestation of a podcast, right.

“We had episodes go missing across 50+ shows on Monday” … “There are inconsistent results between the website and the app” … “One entire network that we manage hasn’t had the latest episodes from the last week or show show up in Apple Podcasts yet.”

We’re also seeing this. For PodClock, which has an entire season of test episodes, we noticed that different devices displayed different numbers of episodes. That podcast is now fixed - someone from Apple noticed our tweet; but not everyone has the blue tick or the 16,000 followers.

The new Apple Podcasts app appears to not allow <a href links to websites, which impacts publishers’ ability to drive traffic to sponsors and donations. The Apple documentation says these are valid, though.

Podnews understand the lack of links in descriptions is a bug, only affecting users on some versions of iOS. This will be fixed in a forthcoming update.

The new affiliate program for podcast subscriptions, launched last week, went live with a sign-up form that didn’t work for all users.

Today, those that did sign up have been told to “hold off on pulling or creating any links for Podcasts, as there are still some elements being finalized at this time”.

Once more, a product from Apple Podcasts appears to have gone live without adequate testing, and has had to be temporarily pulled.

Podcasters are beginning to promote other platforms

“I’m about to start putting in announcement at the beginning of episodes encouraging listeners to use any app other than Apple Podcasts if they want to get my new episodes right away.” … “I am changing the language in my podcasts directing people to listen and review on Apple Podcasts to, instead, reference our pod․link site, because I have to expect that Apple Podcasts will be the slowest, latest, and worst experience of all the platforms my podcasts are available on.” … “This whole thing has very seriously shaken how we’re thinking about our promotional strategy for shows.”

This should, perhaps, be the most concerning piece of feedback to Apple. When people lose faith in your product, it takes a long time to regain that faith.

There has been no public acknowledgement of any issues by the company. Podcast publishers have to convince their clients that it’s not just them - it’s a widespread issue with Apple Podcasts: but without any public acknowledgement, it’s hard to show; similarly with podcast hosts dealing with support enquiries. The lack of public statements is damaging relationships in the podcast business.

We’ve forwarded our (anonymised) feedback from Apple Podcasts publishers and creators to the team at Apple; but, as we expected, had not received any comment by the time we published.

Affiliate links: This page links to Apple Podcasts. We may receive a commission for purchases made using them. Affiliate links are added automatically.

Thank you to our supporters