📈 More downloads for YOUR podcast 📈 — Find out what search terms people type on Spotify and Apple Podcasts to find top ranking shows in your niche. Add them to your titles and descriptions and start ranking for these words too!

Start Your Career In Podcasting | Berkeley AMI — In this master class, learn how to plan, interview, launch, edit and produce a podcast. You'll work with experienced instructors and leave with a podcast produced by you. Use code PODNS15 for 15% off.

The Art Persists Podcast — Artists and activists discuss artistic freedom and their own experiences of persecution and censorship for their art.

The Tech Stuff - with RSS.com

RSS is open. RSS is safe. RSS is reliable. RSS is simple. RSS is powerful. RSS is extensible. RSS is podcasting. Get your RSS feed at RSS.com or wherever you host your podcast.

Democracy Decoded, a podcast by Campaign Legal Center, examines our government and discusses innovative ideas that could lead to a stronger, more transparent, accountable and inclusive democracy.
The latest episode of Built to Sell Radio has AdvertiseCast’s Trevr Smithlin and Dave Hanley talking about their acquisition by Libsyn. It includes “a crafty negotiation tactic to increase an acquirer’s offer”…
The team from Wondery’s Morbid are launching Frozen Head today - a twisted tale that investigates the quest for eternal life, and the lengths people will go to achieve it. It debuts today on Wondery+, and will be available everywhere from Jan 23.
Normalize This is new today from SpringHill. Figure skating champion Adam Rippon and media personality Danielle Young unpack different trends, behaviors, and stigmas and discuss whether or not they should be normalized in our everyday lives. The first episode looks at dating apps.
One Minute Podcast Tips is new from Danny Brown today, and does exactly what it says on the tin - short, punchy tips in a minute or less to help you be a better podcaster. Recording, editing, publishing, sharing, growing, networking, and more are covered in the snack-sized episodes. 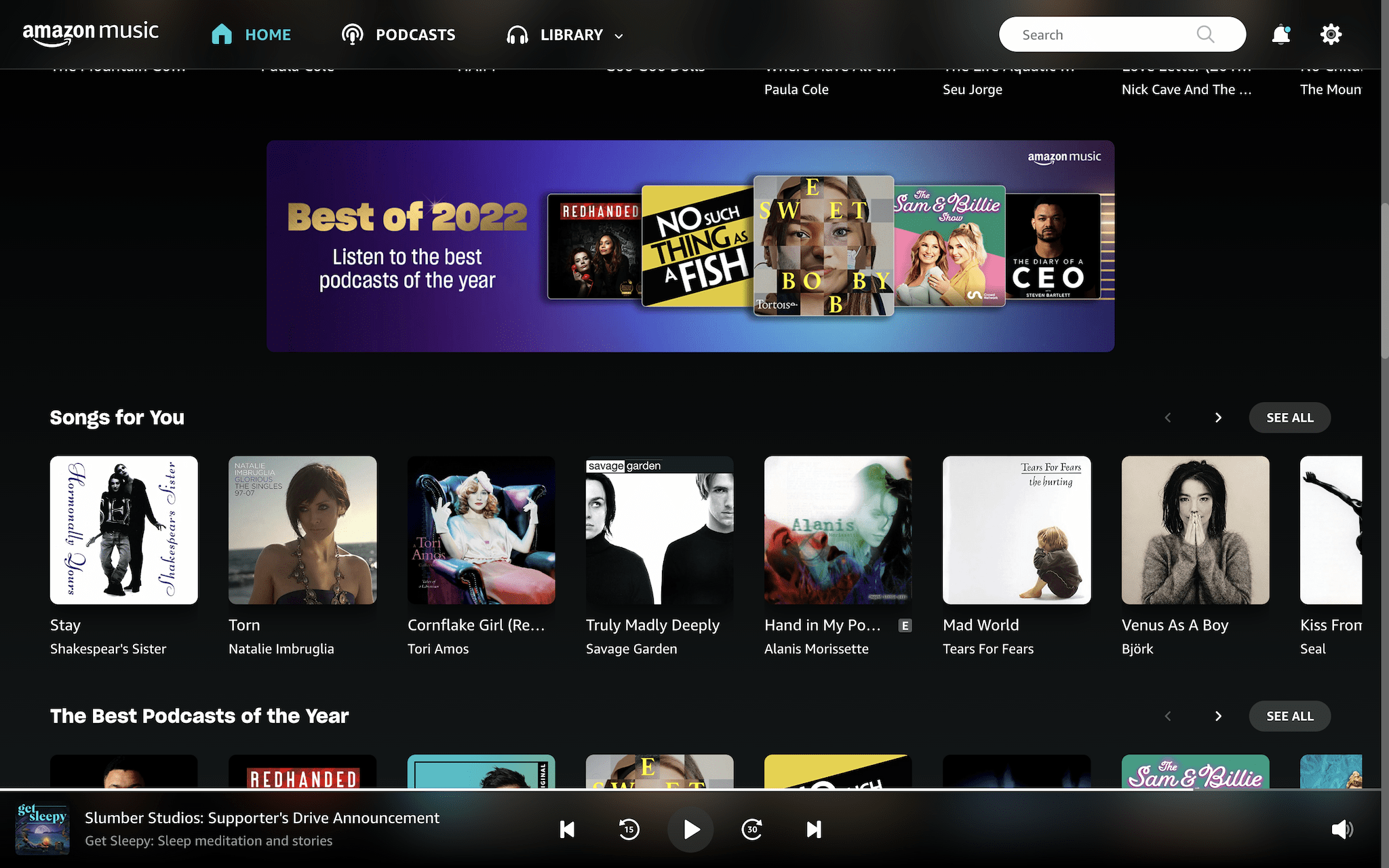 The “best of 2022” got significant promotion on Amazon Music’s front page. 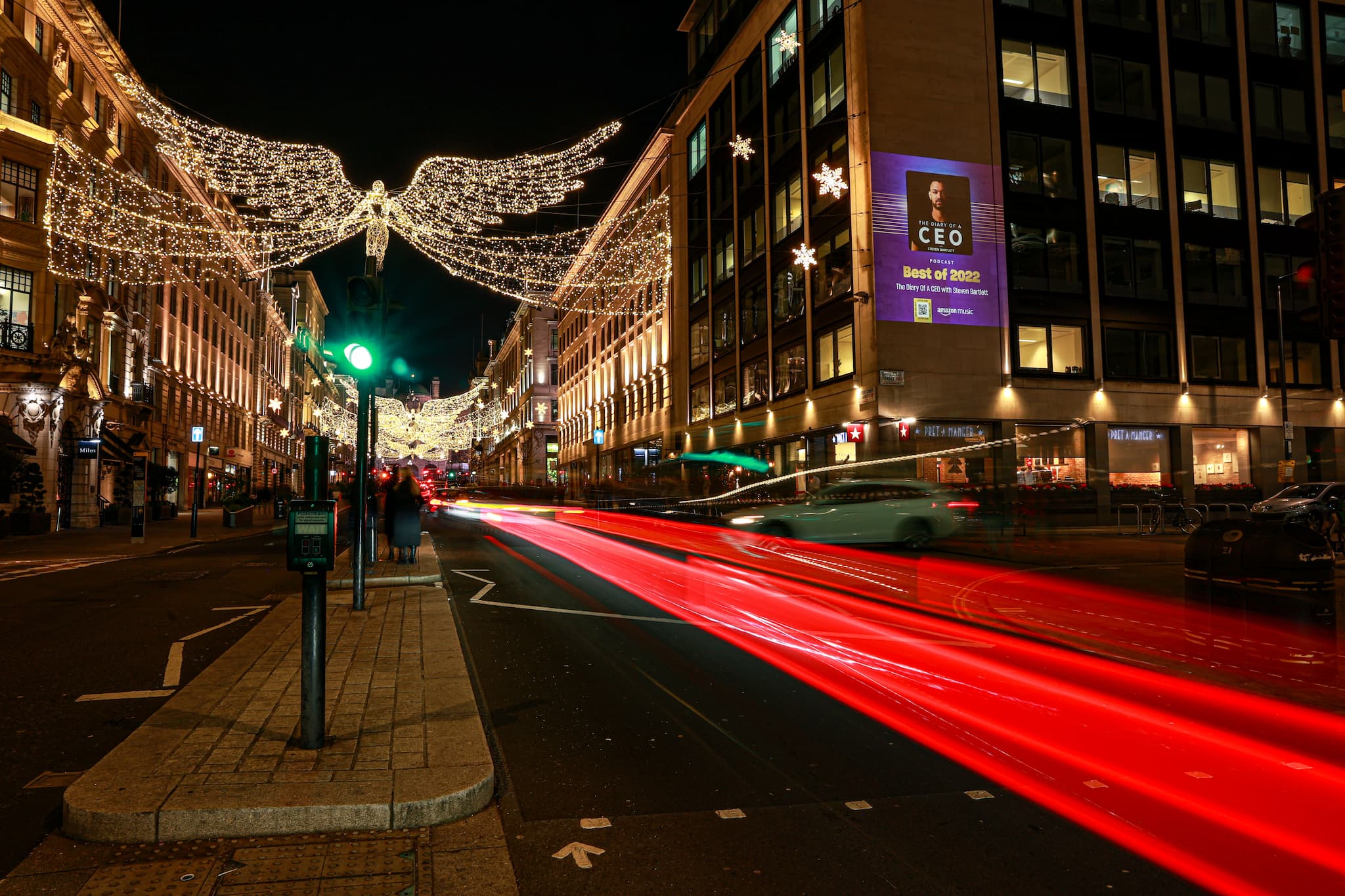 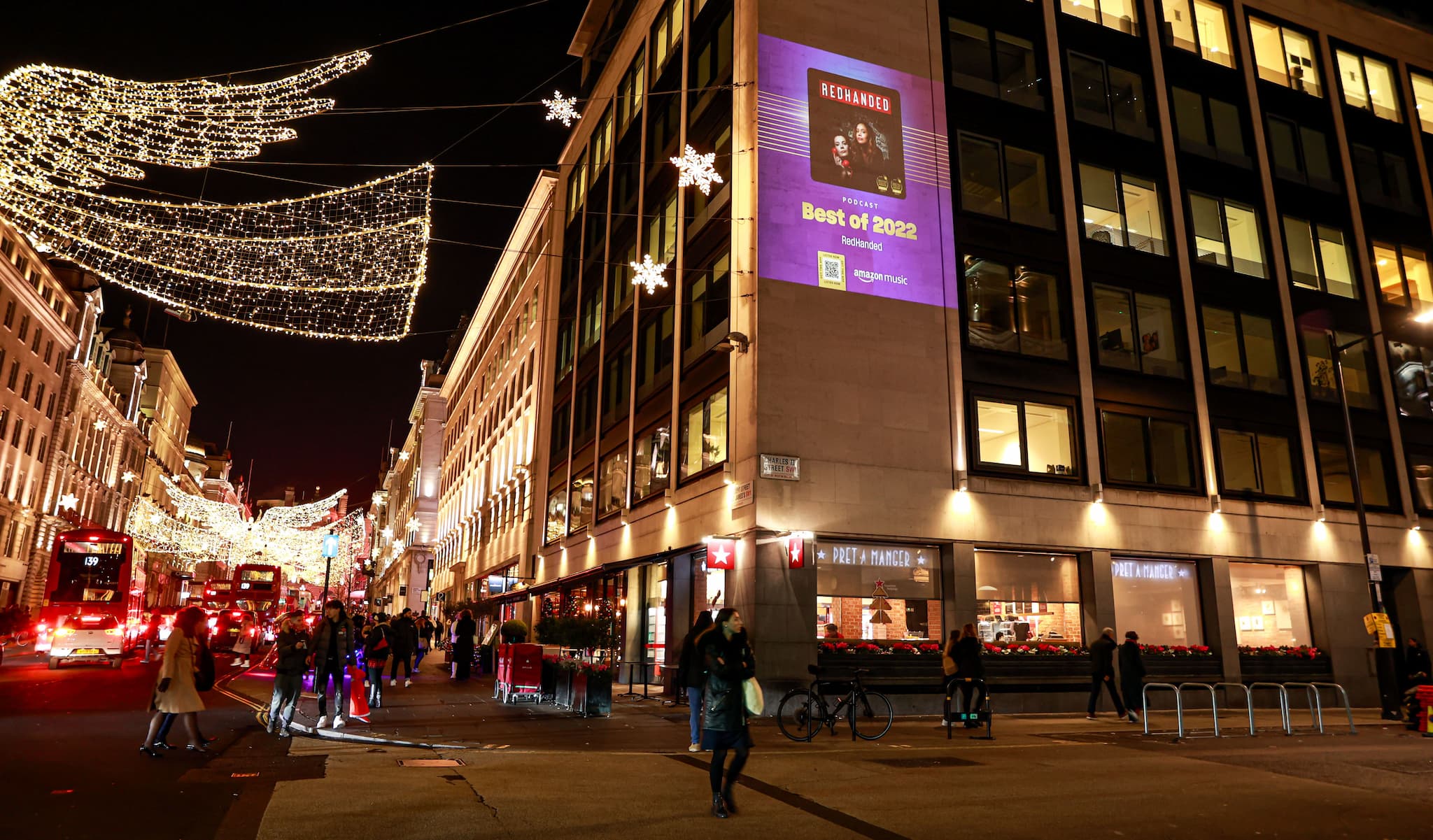 Lower Regent Street, one of London’s busiest shopping streets, with Piccadilly Circus in the distance. Behind us is where the King lives. 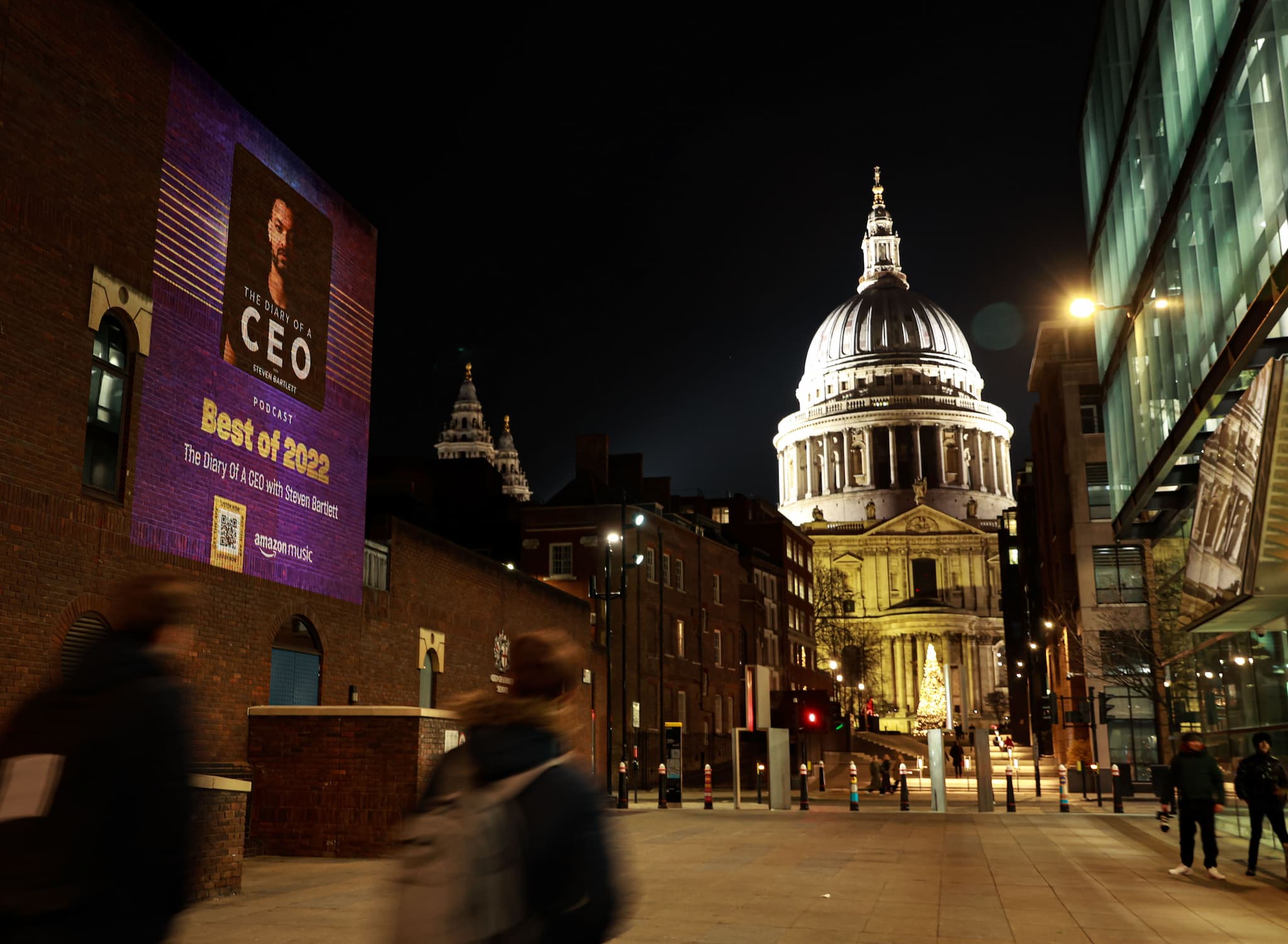 Facing St Paul’s Cathedral, rebuilt after the Great Fire of London and completed in 1711. 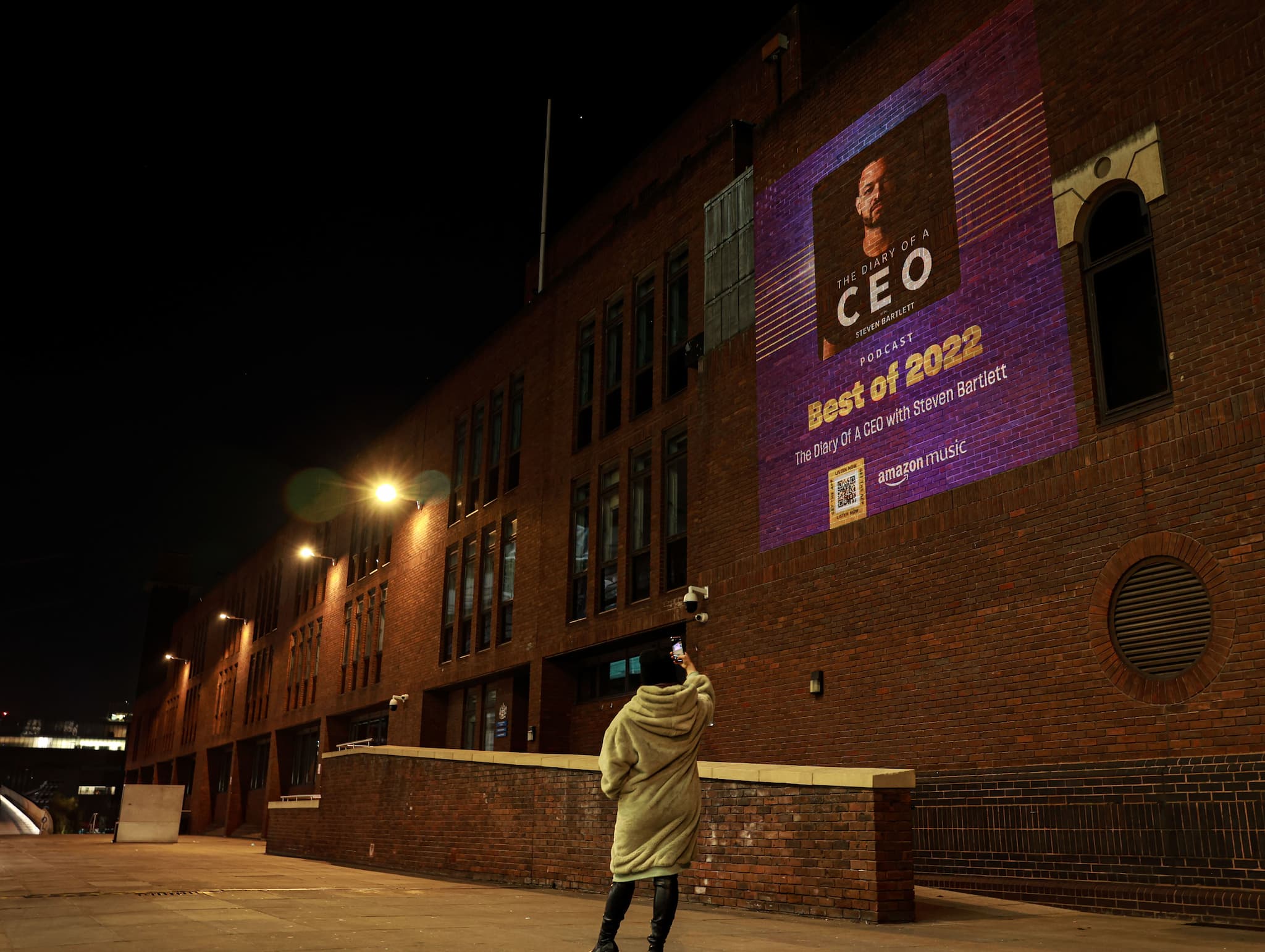 Facing down to the Millennium Bridge. Opened in 2000, it wobbled too much, and was re-opened in 2002. (It still wobbles). 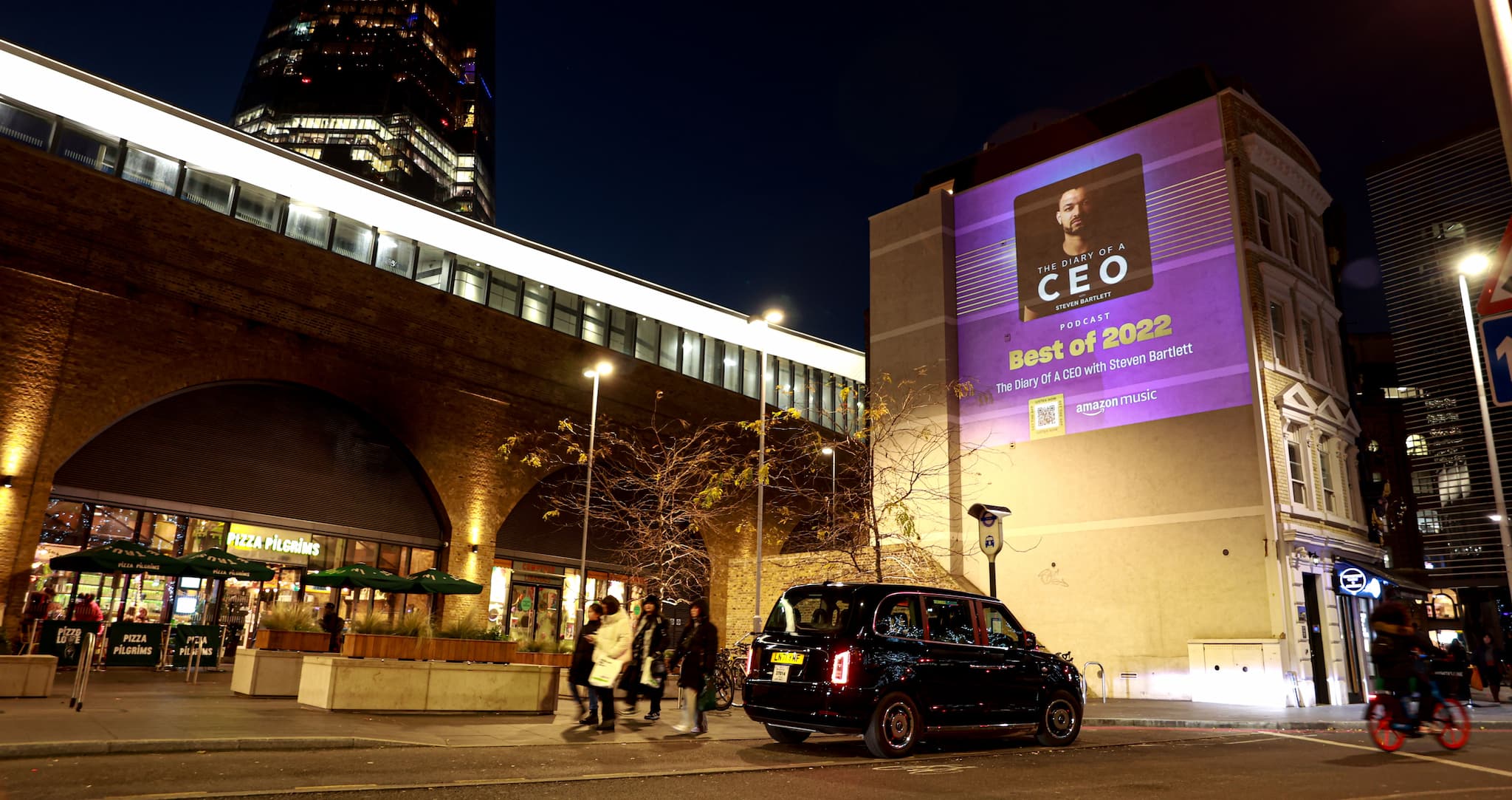 Bermondsey Street, near London Bridge station. The building used as a projection screen houses The Shipwright’s Arms, a pub built in 1884, and a hairdresser. The Shard looms to the top-left of the photo. 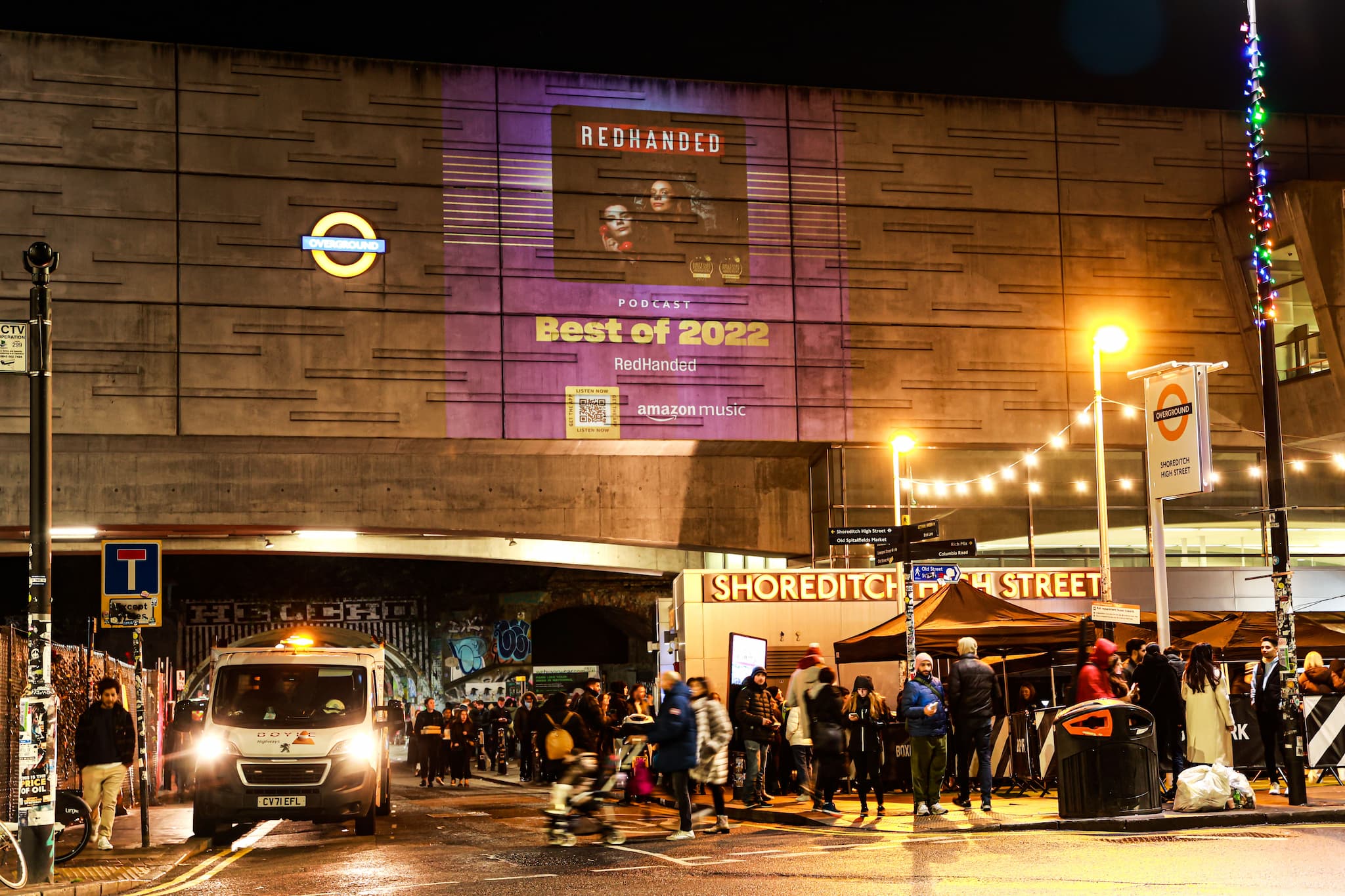 Shoreditch is where the hipsters live. Shoreditch High Street Station, one of London’s newest stations, opened in 2010. It doesn’t take you anywhere useful, so the hipsters are kind of trapped here. 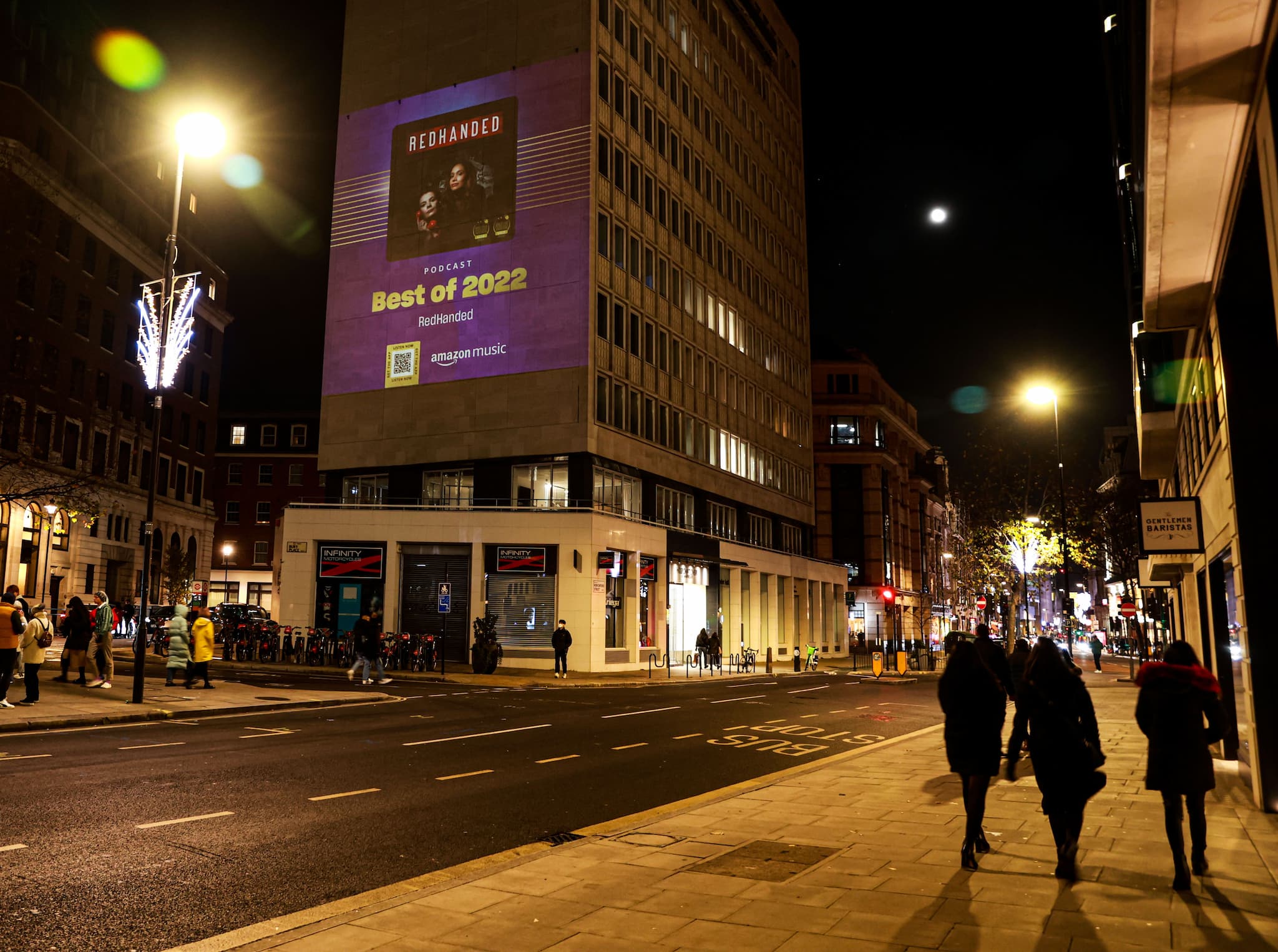 New Oxford Street, a short walk away from the busy Holborn underground station. Holborn Tower, built in 1960, is being used to display the ad here: the Women’s Freedom League, founded 1907, worked for equality between men and women from its headquarters on this site between 1914 and 1959. 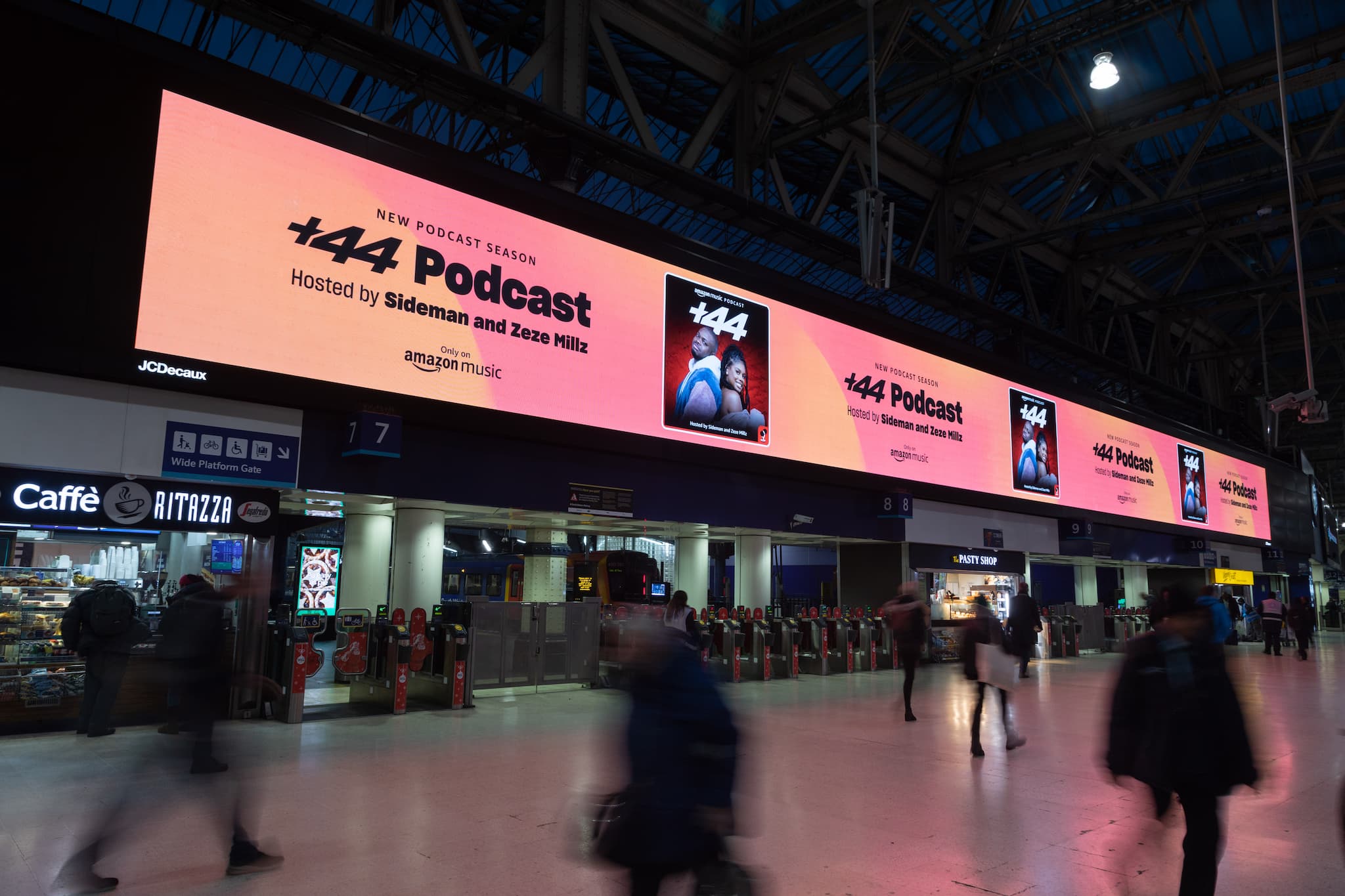 From a different campaign (but also shown recently), here’s London’s Waterloo Station, and the +44 podcast. Waterloo is the busiest station in the UK, handling 41 million passengers a year, and was featured in The Bourne Ultimatum. The ad for the podcast is animated. 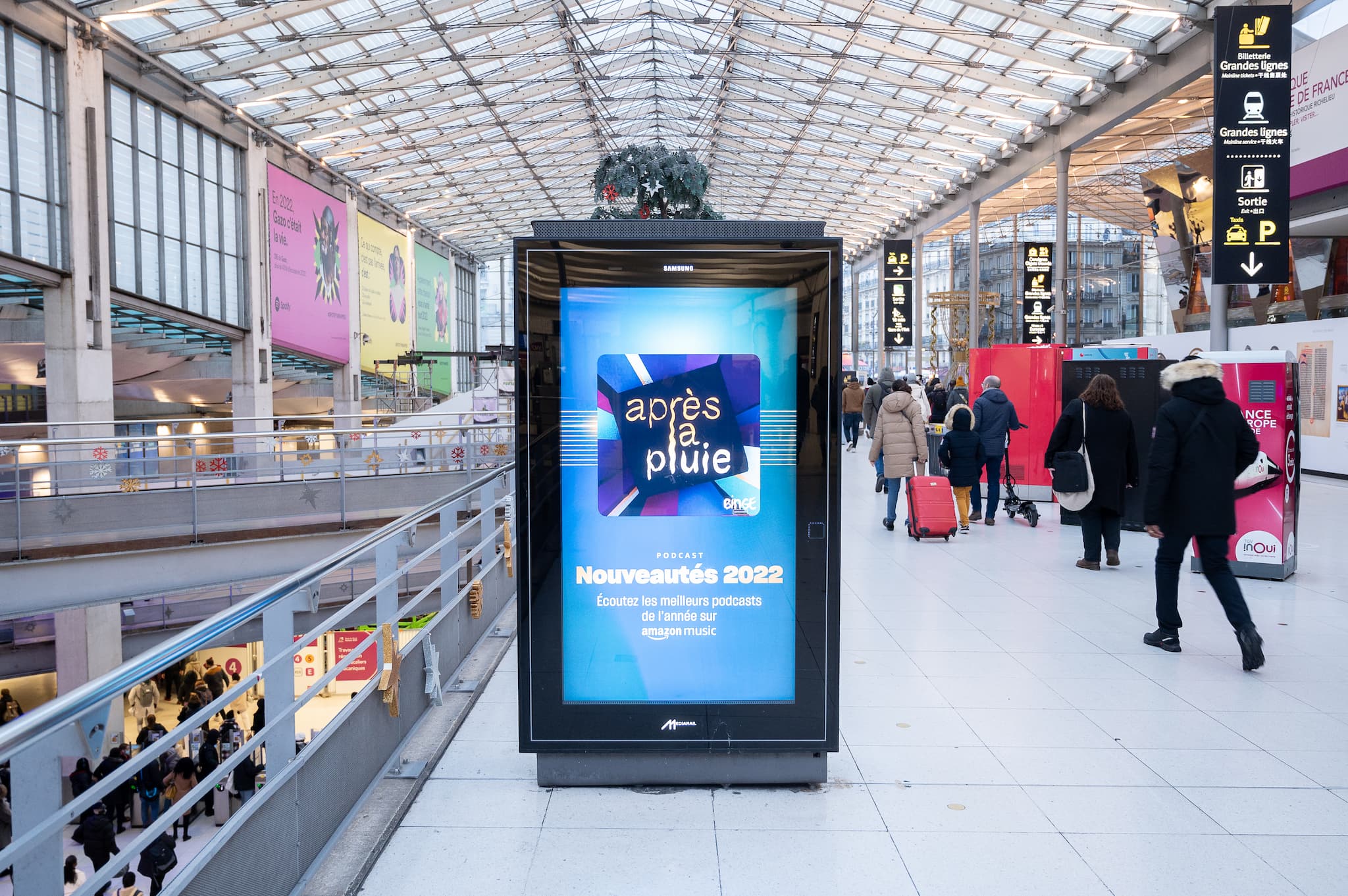 And now, to Paris. The Gare du Nord, a train station opened in 1864, is undergoing a four-year renovation programme. It also featured in The Bourne Ultimatum, but the Gare du Nord is the busiest station in Europe with 131 million passengers a year. 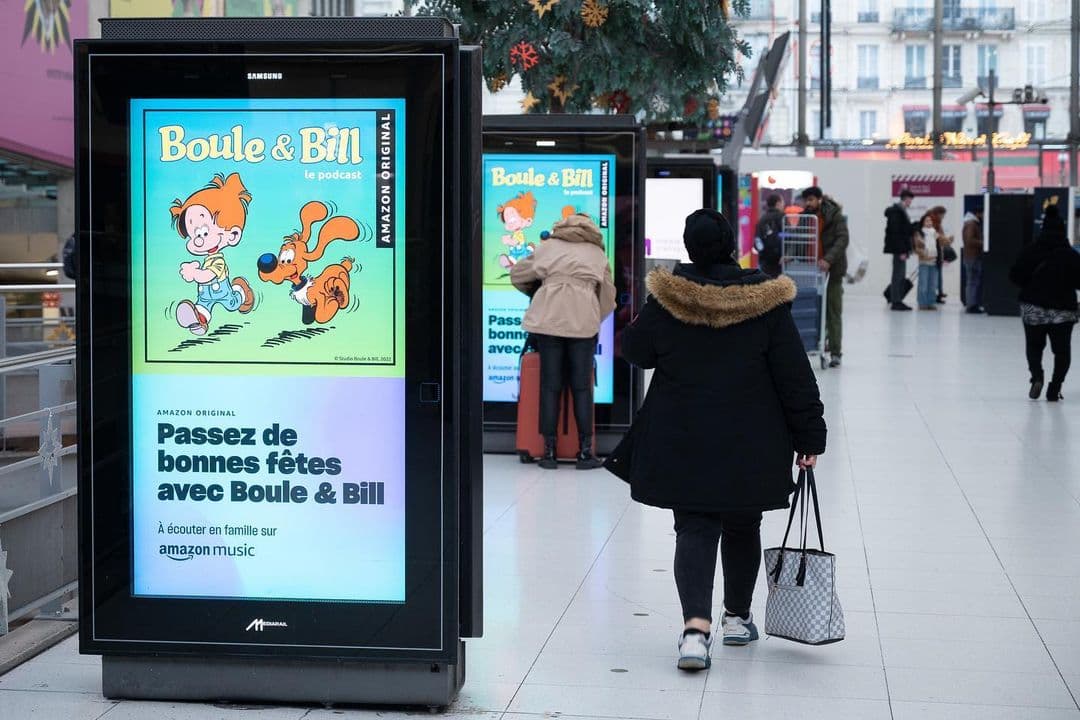 The Boule & Bill podcast is produced by Bababam. Bill is the name of the dog. The comic strip has been published since 1959. 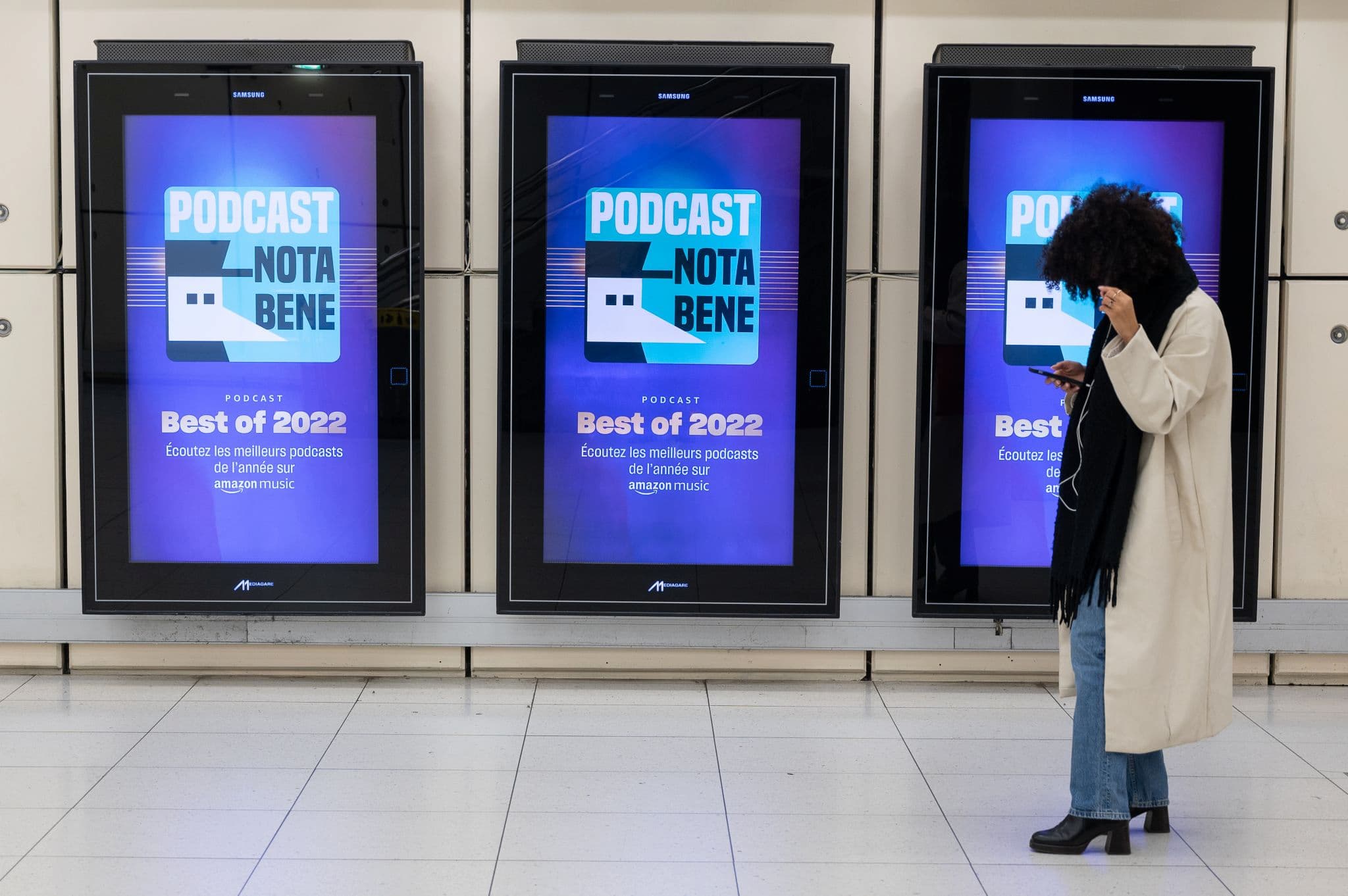 Nota Bene is a history podcast from Acast. 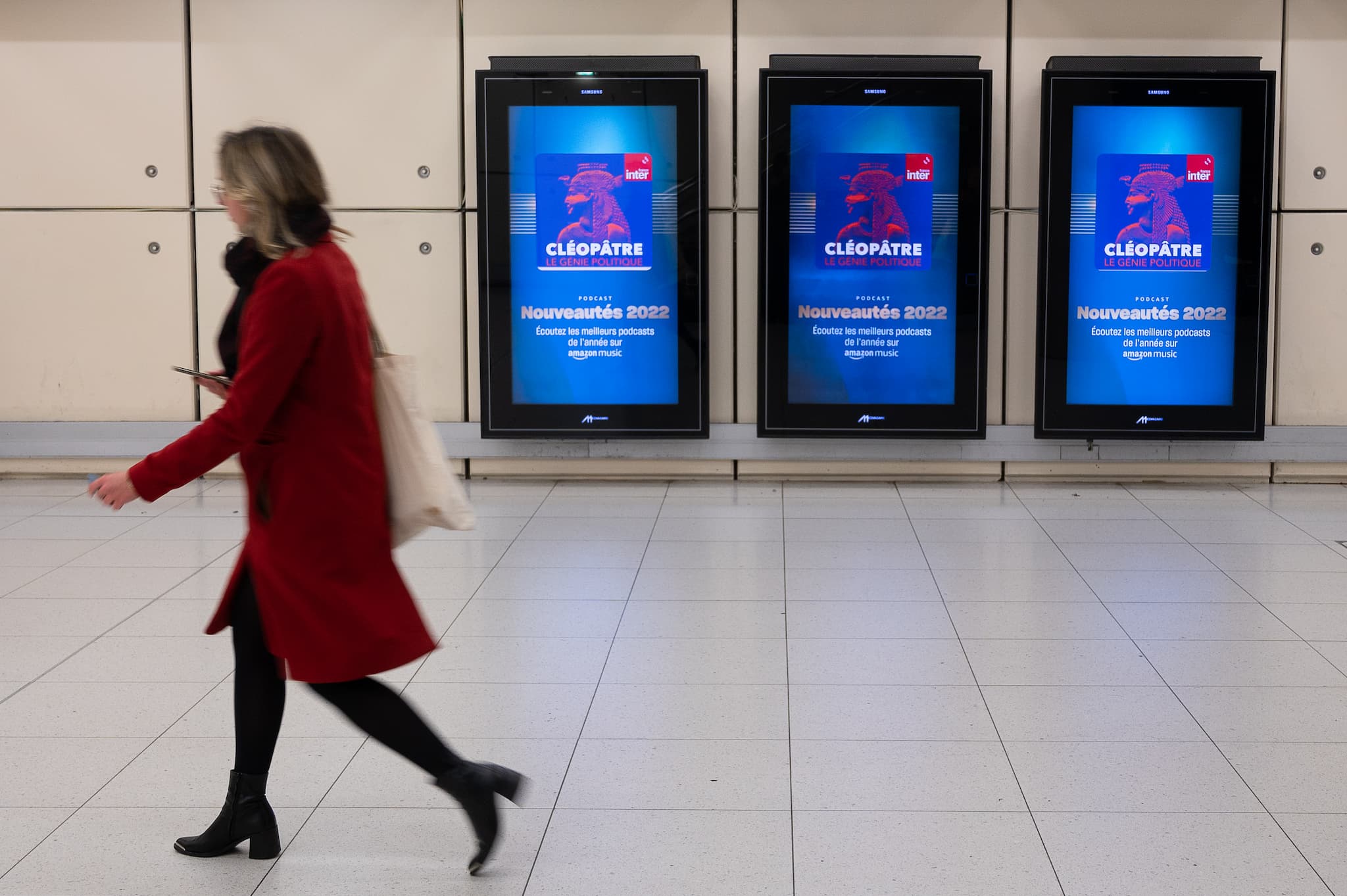 Cléopâtre is another history podcast, this one from France Inter, the French equivalent of NPR or BBC Radio 4. French people all look as stylish as this.