Italy: Ipsos presents the results of the third edition of its 'Ipsos Digital Audio Survey'.

The survey was launched by Ipsos in 2019 with the explicit intention of allowing the market to have a solid point of view on users’ models and use logic in a specific territory of the media & entertainment universe such as Digital Audio. The data has become a reference point in the sector and an important piece for the development of the audio strategy of those who produce content.

Ipsos Digital Audio Survey continues to embrace all the different varieties of Digital Audio, but again this year the focus remains on podcasts: a format that continues to generate great interest, but which risks being overshadowed by unclear definitions and confused measurements.

The typical point of view of Ipsos, which combines audience measurement expertise and media consulting knowledge, confirms the importance that every strategic reasoning is based on a clear definition and solid measurement. Podcasts, in fact, confirm themselves as a precious opportunity for the publishing and entertainment world: they enhance quality productions and represent a potentially “hospitable” context for brand communications, as they offer an attentive, involved, immersive experience of use, safety. They allow the development of invested audiences which, in perspective, if adequately stimulated and satisfied, can credibly become the subject of paid proposals. 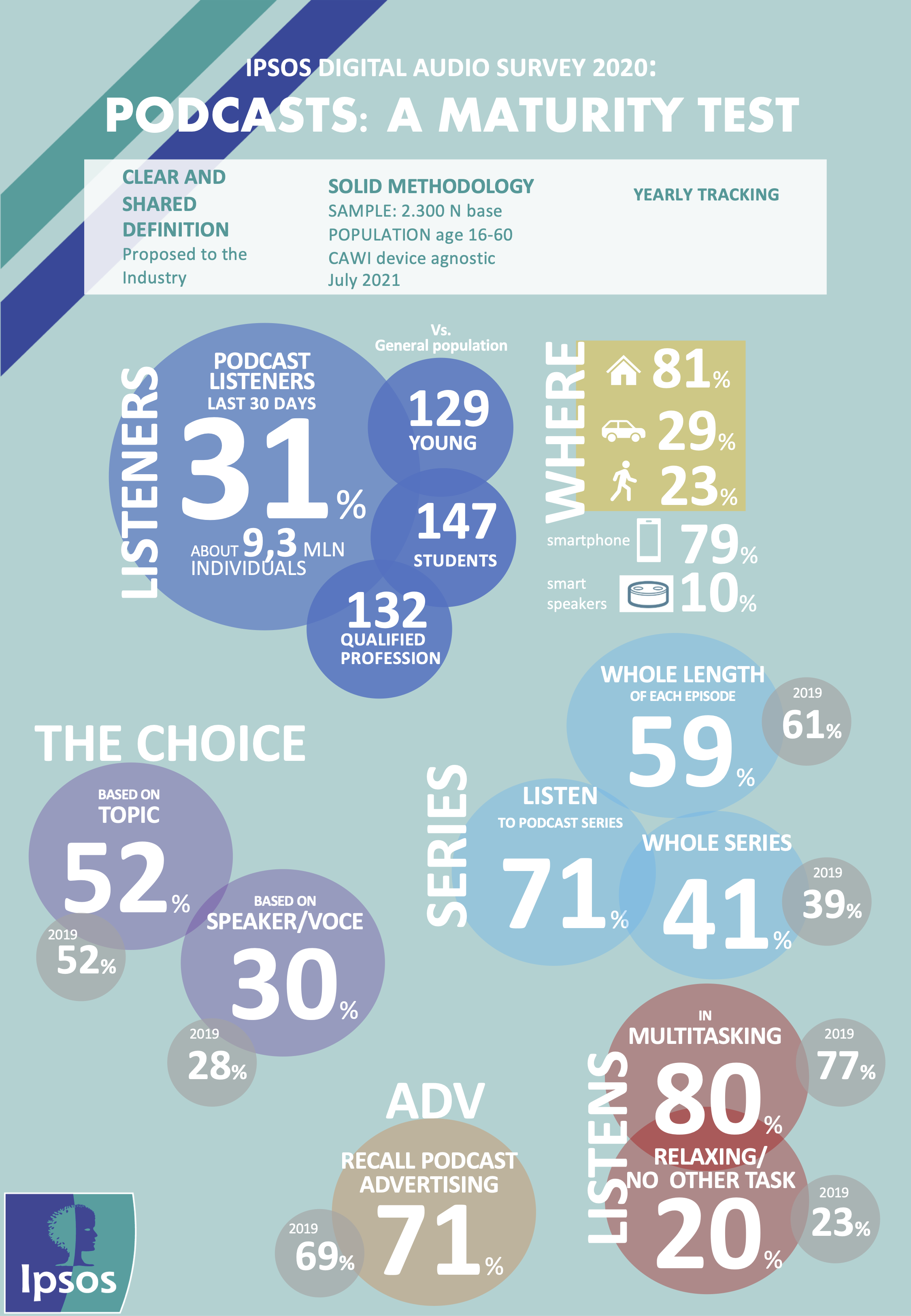 The data monitored by the survey, listening to podcasts in the last month, reaches 31% in 2021 among 16–60 year olds (about 9.3 million people), with a slight growth but which consolidates the positive trend recorded. last year (in 2020 podcasts had seen a leap of 4 percentage points, going from 26% to 30%): a proof of the fact that the diffusion of the format is a stable and non-transitory result of the digitization process that took place in the pandemic context.

The format remains remarkably young (44% under 35), but in 2021 the adult, graduated (27%) and professional (13%) targets also grow. Even if their “early adopter” connotation (the first to adopt new technologies, preference for premium products) slightly attenuates with the evolution of the registry, podcast users confirm themselves as more responsible and receptive consumers than the average.

The substantial stability in the penetration of the target seems to indicate that further significant growth processes require an “education” action on the audience, to socialize the general population to this format and allow the user to foreshadow the many possible ways of access and opportunities for the smartphone is further strengthened as the most used device for listening to podcasts (79%), the computer (43%) remains in second place, but in decline, as well as tablets (26%).

The elective place of listening is definitely the home (81%), followed at a distance by the car (29%) and by listening on the street / walking (23%), while the use of means of transport (19%) is still in decrease (involving 26% of users in 2019), likely the result of the impact of the pandemic on mobility.

Listening to podcasts takes place while other activities are carried out at the same time (80%), with a trend to be monitored in the future.

One figure that we have begun to monitor is that of the platforms used to listen to podcasts, the Digital Audio Survey in 2021 highlights that Spotify is the most used platform followed by YouTube.

The approach to podcasts remains mainly “pull”, with the user who decides to listen after searching the internet for a topic that interested him (34%). Looking ahead, it is interesting to note that GEN Z (16-25 years old) is more easily pushed to listen to podcasts through social word of mouth (32% vs. 25% of total podcast users) and suggestions from the app they use (25% vs. 16%).

In the trade-off argument vs. speaker as driver of choice is confirmed as the strongest (52%), but the relative weight of speakers continues to grow (30%).

In this third edition of the Digital Audio Survey we investigated the specific role of influencers, who appear to have an influence in promoting listening to podcasts for 2 out of 3 listeners, with a particularly strong weight among the youngest (74% of those under 35 vs. 54% of 45+).

The strong level of engagement found in 2021 is confirmed, with 59% of users listening to podcasts for the entire duration, and listening to the entire podcast series continues to grow (41%). Loyalty is a crucial issue, especially for a format driven by pull logics. The offer of podcasts increases, therefore, but users still remain firmly in control of the user experience, choosing / intercepting content that is in most cases able to keep them engaged.

Podcasts prove to be an excellent advertising context: the recall of advertisements associated with podcasts remains very high (71%), especially in the form of adv before / during / after podcasts. This is followed, in memory, by the announcements read by the speakers (with a higher-than-average memory among the young people of GEN Z), and the podcasts entirely focused on a sponsor brand. The ability to activate advertising communications combined with podcasts remains stable and important: 2 out of 3 of those who remember the adv during podcasts declare that they have taken an action later, a percentage that represents just under one in two podcast users.

“The photograph taken by our research in July 2021 portrays a positive scenario for podcasts in Italy. The growth trend of reach does not stop, confirming that the significant increase achieved in 2020 was not a will-o’-the-wisp. The listener profile remains much younger than the general population, but this year the weight of the more adult, educated and professionally qualified component is also growing. The audience of podcasts remains characterized by socio-culturally advanced traits: the connotation of “pioneers”, which is slightly attenuated for age reasons, however remains marked. The “pull” access method remains the prevailing one, the level of engagement stable. In continuity with previous years, the user seems to be in control of his experience of use, without jolts despite an ever-expanding offer. In this scenario, the memory of advertisements combined with podcasts is further strengthened.

Now we are at the test of maturity: to continue to grow significantly it will be necessary to find a way to address even a less exploratory audience, thus setting oneself to find the right communication hooks and channels of engagement to promote and sell the “unique proposition” of podcast ".

The curators of the survey were Nora Schmitz, Leader Audience Measurement Ipsos, and Claudia D’Ippolito, Senior Researcher in Media Development.

Methodological note: The Digital Audio Survey 2021 was carried out on a sample of 2,300 representative cases of the Italian population between 16 and 60 years and interviewed via CAWI with a 15-minute questionnaire in July 2021.